There were a few cyclists going into Slovakia but not that many and the ones that were there had more luggage, more like us.

Our intention was only two spend about two hours in Slovakia as a short part of our trip, when crossing from Austria to Hungary.  We took the bridge into Bratislava and went through downtown.  My shifting had been getting worse and worse and I could use fewer and fewer gears.  It made popping noises. 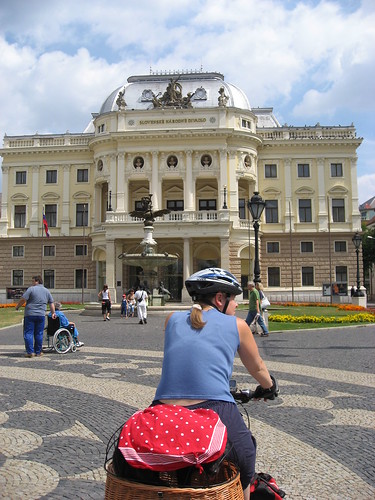 As we left the city on one of the many bridges I really started skipping gears.  I tried to tighten the while a little bit, but it didn't help, eventually it just came stop pedaling and was wobbling.  If I looked at it the insides of the hub were comming out. 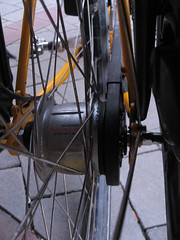 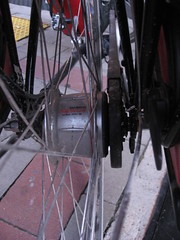 The yellow bike of course is mine, if you look very carefully you can see that the the hub is sticking out of the metal compared to Taska's (the black frame one).  Even worse it came out un-evenly so the wheel wobbled and hit the breaks.  Eventually I removed the breaks so pushing the bike was easier.

We decided to try and go back to Bratislava, there was an advertisement written on the bridge.  We put the address into the GPS and tried walking to there, but we could not find a bicycle shop there.  The walking was hard and started blistering the back of my tendon, and I lost one of my toe-spikes off my cycling shoes.

So the questions was what do we do next?  The answer was I got on Taska's bike and she walked my bike to downtown and we agreed to meet at the bridge we had crossed before.  I started zig-zagging the town trying to find bike-shops and asking traffic cops who coulds speak some German (older people spoke german, younger seemed to speak english).

Eventually Taska sent me an SMS I was circling around the meeting spot, she had apparently gone past it and tried one of the Tourist info points.  Then she discovered she could not call me on here mobile, but she could text me.  I was capable of calling her.

Eventually we marched off with our little bits of mis-remembered hear-say information.  We found a decent sized bicycle shop and they even had one sales associate with passable english.  Though the mechanics spoke no english or german.  They told us they could do nothing with Nexus hubs.  They gave the the address of Kaktus Cycle to try, but no the telephone number.

We then tried the people at the info-point had told Taska.  It was a small hole in the wall repair only kind of place and No English, No German, and No Shimano Nexus.

So then with GPS again it was off 4km away on the other side of town.  I am very glad I had the GPS.  I needed to go down an ally way of high-rise communist era apartments to a little building with no windows facing the ally.  The side was windows all painted white of what appeared to be a grocery store, and behind that was the bike shop, which was about 4m wide and 50m long and stuffed with 50 people.  Also no help for my hub.  When back to the bridge and found Taska.  We decided to try and call the bicycle shop we go the bikes from, as I suspected the mechanic could not walk me through a fix, they said they would try and research something and we could call them tomorrow.

We gave up on going anywhere else that day and headed back to downtown, tried to figure out the boat schedule and decided it was too late to take a boat Wien (Vienna) but it was a possability for the morning.  A nice lady tried to help us understand the conflicting signs for the Twin-City boat line, and concluded in Slovakian they also were incomprehensible.

We then tried to find a Hotel, they were all expensive or far away.  In the end we decided on an Ibis.  An Ibis is about as boring as it gets.  Owned by Accor and always have competitive but not great prices, located just outside of the part of town you really want to be.  They have pricing charts in the lobby and everything is ala-carte (Breakfast, Dog, ....)  They accept credit card, EC card, Euro, or Slovakian Koruna.  As was not surprising it was full of Germans.  It also had a free Internet Kiosk in the lobby if you would lurk long enough to guilt someone into letting you use it.

This was handy.  We discovered the official Shimano Service Center in town was the shop we had already been to.  We got also found out the train schedule to Wien (Vienna) and a list of 5 Authorized Shimano Service centers and their numbers.  We waited until the morning and called them.  In Wien (Vienna) the answers were no such number, no answer, 2 weeks, we won't talk to you unless you show up here with money, only if you can use 28" wheels.  Talked to the bike shop, Shimano told them the same thing we discovered from the Web.  I concluded conversion was in order, becasue it was the only thing that would get us out of town that day.

I called Zanso ago and tried to explain what I needed over the phone, they were at least promising, they told me they had two mechanics on staff.  I went there ready to try and explain what I wanted to do.

My frame is angled dropouts and bolted and routed for standard Shimano XT, external cable routings, hydrolic or cable breaks, Rohloff, or Nexus hubs.  And it is steel so it is a very flexible frame for how it can be used.  I wanted a new rear wheel, a standard external derailleur, and a shift lever.  They were first convinced I could not put this on my bike, then they were convinced it wouldn't work with my chain ring.  After much arguing with the salesman who would translate to the mechanic we finally agreed.  He found me a pre-build Mavic MTB wheel that was had a 30% discount on it.  A shimano XT derailleur, and he wanted me to switch out the cranks for mount bike cranks and I worked very hard to convince him I did not need a front derailleur.   They were claiming it would 5hrs of work but they would get it done that day.  They did the conversion in 4hrs, the mechanic understood what I wanted (though not my words) better than the sales guy.  New chain, new wheel, new cassette, new grip-shift style shift lever (the Nexus 8 speed is not compatible with the cassette 8 speed).  I had a working bike, though I was warned I could only use 6 of the gears, and he gave me the 6 lowest (easiest) gears because more than that and the chain would fall off.  We as of 4PM we had the bike again.

The Hotel let us store our luggage there, so it was back to there, repack the bike figure out how to strap the old broke wheel to the back of the bike and we were leaving town around 17:00.  Finally on the road again.  It wound up being 30hrs, and $275 worth of parts and labor (I haven't seen the cell phone bills yet).  And we were out again.  Our goal was Hungary, Rajka a boarder town.

The repairs worked and we were off and rolling again, and looking more like we were packed for an expedition than every before.  But we were traveling with all of our stuff with us and still under our own power.  I am sorry to say that Bratislava remains mostly a frustrating memory for us.  It is a smaller capital city, a very recently rebuilt "old town" and local food is not on ready display.

As we left we noticed what an athletic town it was, tuesday evening and the paths were swarmed by in-line skaters.  Nice quarry lake at the edge of town filled with people, relaxing, fitness swimming, taking a break from their speed in-line skating.  Leaving what traditionally looked like a bike path was the in-line skate path and there was an old road dedicated to bicyclists and a couple of cycling clubs passed us in speedy peletons.